Pure joy for your senses

Perfect for nice occasions: “Mein Kristall” – the sparkling crystal wheat beer without yeast, ideally served as an aperitif in a fine tall glass. Its delicate carbonation stimulates and is enjoyable. It is delicious with fish dishes. Of course, it can be also served in the classic wheat beer glass – just as you like.

Ideal for celebrations: “Meine Festweisse” – the bright golden wheat beer, newly launched according to the old Oktoberfest beer recipe. It has its special fresh and citrusy note thanks to the Cascade hops and the fruity aromatic Schneider yeast – a festive drinking experience; it could not be more refreshing and drinkable.

Go on a discovery: “Meine Hopfenweisse” – an incomparable taste experience that exceeds all expectations …. flowery hoppy, full-bodied with malty aromes – this is how far wheat beer can go. A special Schneider treat! Fireworks for your senses. Shiny golden wheat doppelbock.

This brew is the result of the long friendship of Brooklyn brewmaster Garrett Oliver and Schneider brewmaster Hans-Peter Drexler. Garrett had always admired the delicate balance of flavors in Schneider Weisse, while Hans-Peter had long enjoyed the effusive hop character of Brooklyn East India Pale Ale and BLAST! Garrett’s concept for the collaboration was that each brewmaster would brew essentially the same pale, hoppy weissbock in the other’s brewery, but with different hopping to reflect the local hop flavor. 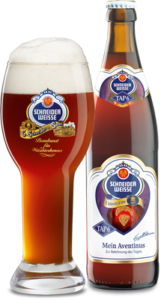 Reward of the day

A brewing art for wheat beer geeks: “Mein Original” – this traditional and popular wheat beer has been brewed according to the original recipe of Georg I. Schneider since 1872. Deep amber, perfectly balanced and powerful. A taste of Bavaria. A taste like home – whether at home or socializing at the “Stammtisch”. 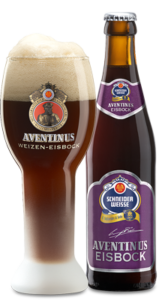 Magic and black soul: “Aventinus Eisbock” – mahogany-coloured, almost black Eisbock for sensual enjoyment – should best be enjoyed from a big wide glass. This Schneider speciality seduces from the first sip. The special freezing method provides it with a soft, elegant body. Yet, it is very powerful and intense with aromas: spicy plum, banana and clove with a hint of bitter almond and marzipan – a magical taste experience.